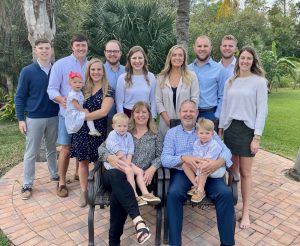 Bernie van Eyk has been Pastor of Grace Presbyterian Church in Stuart, FL since 2005.  Bernie was raised in Chatham, Ontario, Canada.  He graduated from the University of Windsor with a Bachelor of Commerce, and from the University of Western Ontario with a Bachelor of Arts.  After working in business for a number of years, Bernie moved with his family to Southern California to study at Westminster Seminary California, where he received a Master of Divinity.  In 2000, Mr. van Eyk was ordained as a minister in the Presbyterian Church of America, and called to be the Organizing Pastor of Christ the King Presbyterian Church in Vero Beach, FL.  Bernie and his wife Patricia have been married since 1991 and together they have six children:  Stephanie, Emberlee, Melissa, Matthew, Calvin, Ryan, and six grandchildren.