For more than thirty years the ministry of Grace Presbyterian Church has faithfully proclaimed the Word of God.

The origins of Grace Presbyterian Church lie in the creation of a young denomination with decidedly old teachings.  By the mid-twentieth century the rich and vibrant American Presbyterian church had followed many other large denominations into theological liberalism and came to deny many of the essential truths of the Christian faith. 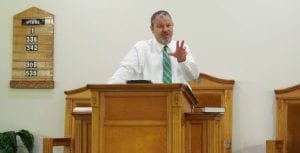 Many within the southern Presbyterian church resolved to remain faithful to the historic Reformed faith and began a new denomination, the Presbyterian Church in America, in 1973.  A few families in Stuart who were also committed to the Reformed faith requested that the new denomination consider planting a church in their town.  Pastor Lynn Downing of Lake Osborne Presbyterian Church traveled weekly to preach to the group until the Gold Coast Presbytery ordained James A. Bowen, Jr. as the young mission’s first pastor.

By 1979, the congregation had grown enough to be particularized as a full congregation.  About the same time a large parcel of wooded land was purchased on Britt Road in north Stuart (affectionately known as “Grace Woods”).  The location was intended to allow the congregation to serve both the Martin County and Port St. Lucie areas.  After several years of meeting in the Stuart Women’s Club on East Ocean Boulevard and other locations, the church constructed the current sanctuary in 1984.  Two years later the building was expanded to provide a larger meeting place, assorted rooms and a large kitchen to provide for the growing congregation.

Over the decades Grace Presbyterian purposed to serve the larger church by planting churches as well as training young pastoral interns to serve in other churches.

After thirty years of shepherding the Stuart church, Pastor Bowen retired in 2005.  Soon after the congregation called Pastor Bernie van Eyk.  In 2010, L. Michael Morales was installed as Associate Pastor of Teaching.

For more than a generation Grace Presbyterian Church has remained steadfastly committed to the “ordinary means” of grace — that is, to the simple ministry of the Word and Sacraments.  From its annual Spring Bible Conference, twice-weekly shared meals and observation of the Lord’s Day, Grace Presbyterian Church has been often noted for its warm community and fellowship.